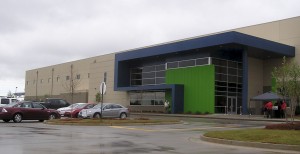 As part of GBB’s constant effort to review and keep track of new and innovative technologies for its client reviews, Bob Brickner, GBB Executive Vice President and Co-Founder, traveled to the City of Montgomery, Alabama on April 15, 2014, to participate in the grand opening of the new high-tech 80,000 square feet “state-of-the-art” Dirty MRF built by Infinitus at a capital cost in excess of $30 million.

Bob noted that it was a very high-profile event that not only attracted local and state politicians, but a wide array of the key staff responsible for the sale and execution for what could be called the first “One Bin for All” MSW processing system in the U.S.  Infinitus welcomed the 150 or so attendees with the red carpet treatment, including a unique ice sculpture IREP logo” in the midst of their food display. The event was held on what will soon be the “waste tipping floor” of the plant. Speeches from the CEO of Infinitus, Alabama’s Governor, and the Mayor of the City of Montgomery followed. 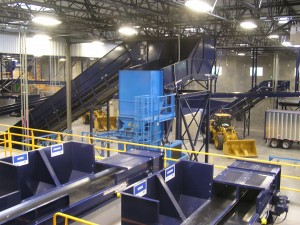 Bob was treated to a detailed behind-the-scenes consultant tour of the Infinitus processing system, which allowed him full access to review all of the processing equipment that was supplied and integrated into the system by the main equipment subcontractor, Bulk Handling Systems. The one-line processing facility, with a 40 ton per hour input capacity, features material recovery guarantees of sixty percent (60%) of the input MSW, plus other organics separation capabilities.  Over 100,000 tons per year will be delivered to the Infinitus project by the City of Montgomery under a long-term contract.

Bob’s primary observation made to GBB staff after the trip was, “Now that we have a real Dirty MRF constructed, from scratch, and soon to be operational on the entire MSW stream, we will be able to confirm some of the myths and controversy about the capabilities of today’s highly automated and sophisticated equipment to separate, recover, and then market recyclable materials from the processing of mixed MSW. This could be a real game changer for the industry, and everyone is watching how this “one bin for all” project works.”