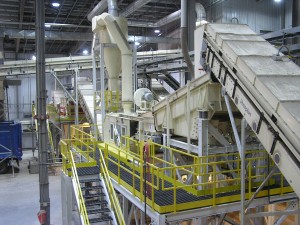 Bob Brickner, GBB Executive Vice President and Co-Founder, attended the June 4, 2014 inauguration of the Enerkem solid waste to Methanol facility in Edmonton, Alberta, as the plant begins formal commissioning of the gasification module. Well-wishers from all over Canada, and a few from the U.S., made the trek to see the more than $100 million facility first hand.

Bob was not only able to participate in the formal event at the Enerkem location on the City of Edmonton’s extensive waste campus in the northeastern part of the city, but was also able to tour the adjacent new Vecoplan system supplied to the waste processing facility. The Vecoplan facility processes solid waste and generates the prepared feedstock fired in the Enerkem gasifier. 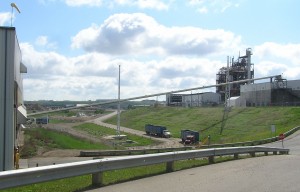 Bob noted to GBB staff that, “The trip by one of GBB’s owners to Canada is part of our continuing commitment for GBB to be on hand to help fulfill the “build it, and they will come” philosophy. We are so happy that new Alternative Conversion Technologies are starting to be constructed and operated at a commercial scale to help define their potential viability for our clients. Studies alone are getting old, so having some actual projects come online is great for the industry. It is time to move past the sketches and computer-generated drawings and on to seeing the real McCoy, so to speak. We are all excited to see how the actual operations stage goes as the new bells and whistles get turned on at these initial commercial sized plants.”

Bob reported that the weather for the event was great, and the snow cover that has been seen in almost all of the Enerkem construction pictures at their conference talks for the past two winters was melted.

The event attracted most of the local, provincial, and federal government funding sources and many of Enerkem’s private investors as well. There appeared to be only a handful of people from the U.S. in attendance, but GBB definitely appreciated the invitation and the opportunity to share a great ribbon-cutting day with our Canadian friends to the north.

Bob’s additional observation to GBB staff was, “We now finally also have an MSW fuel preparation facility in front of a large commercial scale gasification facility firing an RDF-like product. Hopefully the Enerkem facility planned for Pontotoc, Mississippi, can now get primed and advanced with the USDOE and USDA funding support already in place.”