Springfield Resource Recovery Facility Excels for Decades in the Town of Agawam, MA

Solid waste disposal comes with many challenges. One of these challenges is landfill space. The City of Springfield, Massachusetts, had to take action on their insufficient landfill capacity in the 1980s. The City issued a Request for Proposals (RFP) for the construction of a waste-to-energy plant. In October of 1988, the Springfield modular combustion facility became a reality. Initially designed to process 360 tons of solid waste per day, the Enercon mass-burning technology facility was implemented, supplying approximately 400 Kilowatt hours per ton of electricity to Western Massachusetts Electric. Additionally, the facility was designed to provide superheated steam to the nearby Springfield Regional Wastewater Treatment Plant. Gershman, Brickner & Bratton, Inc. (GBB) contributed to the development of the facility by helping to plan, procure, and negotiate contracts with the full-service contractor and later preparing a feasibility study for the revenue bond financing, and monitoring the design, construction and operation of the facility.

By the late 1970s, the City of Springfield, with a population of approximately 500,000, started taking actions toward their refuse disposal problems. Concerned about the insufficient landfill space, the City joined the Lower Pioneer Valley Regional Recovery Committee (LPVRRRC) in 1976. The LPVRRRC was mainly composed of the Massachusetts Bureau of Solid Waste Management and the communities contained in the Lower Pioneer Valley Region.

In 1979, the Massachusetts Bureau of Solid Waste Management issued an RFP for the design and construction of a waste-to-energy facility capable of processing between 700 to 1,000 tons of solid waste per day. This effort terminated in 1982 due to the lack of support from the surrounding communities. In contrast to Springfield, several of the communities had sufficient landfill capacity to meet their needs. However, as time passed, several landfills closed, and the concern about solid waste disposal spread among the surrounding communities. After some planning with the assistance of GBB, the City issued a new RFP for the design and construction of a 290-tons-per-day waste-to-energy facility. By that time, Vicon Construction Company (Vicon) had affiliated with Enercon Systems and implemented a similar waste-to-energy facility in Pittsfield, MA. With this experience, Vicon and Enercon resulted in the perfect team for the construction of the Springfield facility.

In 1985, Vicon associated with Fluor Corporation, and, together, the companies started the construction of the Springfield facility. As part of the project financing Official Statement, GBB prepared a feasibility study that opined on the proposed facility being technically sound and an economically attainable solution to the solid waste disposal problem being addressed. In spring of 1988, the Pioneer Valley Resource Recovery Facility started its operations.

The combustion section consists of three modular, mass-burn, refractory-lined Enercon combustors. A primary chamber contains six stepped hearths. Hydraulic rams transport the solid waste from the first hearth to the last hearth where ash and non-combustible material, termed bottom ash, flows into a quenched trough, and the generated flue gasses flow into the secondary chamber. The combustors work at approximately 1,800 degrees Fahrenheit, reducing solid waste to about 10% of its original volume. Wastewater sludge is carefully injected into the combustion chamber where it is combusted with the solid waste material. Each combustor is linked to a boiler capable of generating approximately 31,528 pounds of steam per hour. The flue gases, which flow from the primary chamber to the secondary chamber, flow into the heat recovery section of the facility. The energy recovery section of the facility is composed of a waste heat boiler and a turbine generator. This generator produces the electricity that is delivered to Western Massachusetts Electric Company. Before released to the atmosphere, flue gases pass through the air quality control system where the gas temperature is controlled; mercury is removed by a carbon injection mechanism, and particulate matter and oxygen are controlled to avoid excess NOX. 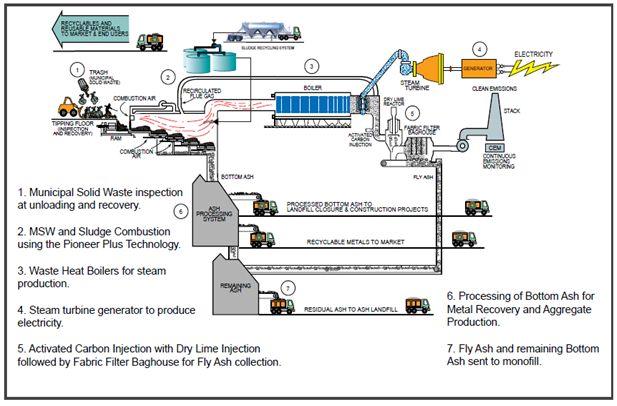 For the City of Springfield, Massachusetts, and five area communities, GBB assisted in the planning and procurement of the 360-ton-per-day waste-to-energy cogeneration project. GBB developed a procurement strategy; prepared and issued an RFP for a full-service waste-to-energy systems contractor; evaluated proposals and conducted negotiations with the selected developer; and prepared the bond feasibility study for the project financing. GBB was involved in the facility’s technical configuration and life-cycle economic analysis. GBB provided construction monitoring, start-up monitoring assistance, and monitoring of performance testing of the facility.

The Pioneer Valley facility received the Safety and Health Achievement Recognition Program (SHARP) award through the Occupational Safety and Health Administration. During its 22 years of operation, the facility has only shut down its operations during scheduled maintenance activities. In addition to its reliable operation, the facility has been used as a resource to educate the community on the value of solid waste.

We have had a long and productive relationship with GBB.