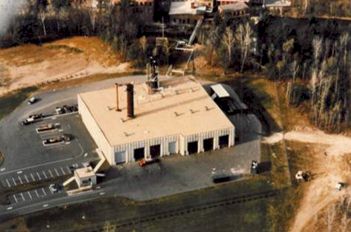 As the first of its kind in 1979, the Pittsfield Resource Recovery Facility in Massachusetts addressed one of the most challenging issues faced by the City of Pittsfield at the time. With insufficient landfill capacity for the increasing need of solid waste disposal, the City decided that the best long-term solution should ultimately rely on Enercon Systems’ mass burning technology. The system consisted of a modular waste-to-energy (WTE) plant designed to produce steam for sale to a nearby private business. With a capacity of processing 240 tons of solid waste per day, the Pittsfield Facility started operating in 1981. Gershman, Brickner & Bratton, Inc. (GBB) monitored the operations and full performance of the Enercon technology and the Pittsfield Facility during its first year. By contributing the technical expertise required, GBB provided monthly reports assessing the Facility’s performance and advising on the best compliance methods. Since 1981, the Facility has sold approximately 700,000 pounds of steam per day to Crane & Co., Inc., and reduced the solid waste required for disposal to approximately 10% of its original volume. The Facility has shown to be efficient and reliable over the past 30 years.

In 1976, the City of Pittsfield, concerned by the need for landfill space for its 50,000 residents, considered two solutions to the problem: a modular system of incinerators to directly produce steam and a refuse-derived fuel (RDF) processing plant to make a supplemental fuel. However, the second alternative was shown not to suit the industry within the Pittsfield community because boiler modifications would be needed to utilize the RDF. Therefore, the City and the consulting firm confirmed that refuse combustion and steam generation was the best approach.

In March of 1978, the City of Pittsfield issued a Request for Proposals (RFP) soliciting private companies to submit the facility’s design and specifications. Three firms submitted proposals, and Vicon Construction Company, Inc., offered the most economical design and largest long-term benefit. As a result, Vicon which was affiliated with Enercon Systems Inc., of Elyria, OH, provided the entire design and construction of the facility. At the same time, two possible steam buyers were identified: Pittsfield General Electric Plant and Crane & Co. Inc., a paper manufacturer that manufactures the paper used to print U.S. currency. Although General Electric (GE) was considered first due to its heavy influence on the city’s economy, it was determined that the facility would not meet GE’s large steam requirements. Thereafter, Crane & Co. and the City signed a fifteen-year agreement in which approximately 700,000 lbs. of steam per day for 240 days per year were guaranteed to be delivered.

The overall cost of the facility was $6.2 million. As reported, failures of incineration facilities in the 1950s led to public skepticism of waste-to-energy technology and, ultimately, the community’s decision to have a private investor, Developer Financing Authority, receive the title to the facility’s property.

By 1981, permits from the City’s Board of Health, the State Department of Environmental Quality Engineering (DEQE), the Massachusetts Environmental Protection Agency (MEPA), and the U.S. EPA were issued, and the facility started its operations producing more than the guaranteed amount of steam. Initially, Vicon affiliated with Enercon Systems to operate the facility. However, in 1994, Energy Answers acquired and operated the facility until 2007 when Energy Answers sold its U.S. operating locations, including the Pittsfield Facility to Covanta Energy Corporation. Since 2007, Covanta continues to own and operate the Pittsfield Facility.

Although Vicon Recovery Associates had the overall responsibility for the design and construction of the facility, Enercon Systems, Inc., designed the major combustion equipment and provided technical support during the installation, preparation, start-up, and operation of the facility. Crane & Co., the energy market, provided a five-acre site where the resource recovery facility was built.

Made of concrete in an area of 30,000 square feet, the facility contains six doors through which incoming trucks enter. After the solid waste is unloaded and inspected in the tipping floor, it is then pushed into the furnaces by a front-end loader. Remaining waste in the tipping floor is deposited in a 500-ton storage pit until it loaded into the combustion units with a bridge crane.

The combustion design consists of three furnaces. Each furnace has a capacity of receiving 120 tons of solid waste per day. The furnaces contain two burners which are used for the initial ignition process. After ignition, the combustion is self-sustained aided by a controlled airflow system in which fresh air and re-circulated air are introduced to the chamber as needed. Consequently, the gasses flow to two waste heat boilers that generate approximately 700,000 pounds of superheated steam per day. As backup, the design also includes an auxiliary oil-fired boiler for the steam generation.

After the combustion has taken place, the remaining ash materials are separated into bottom ash and ferrous materials. The ferrous components are recovered, and the ash is transported to the Pittsfield landfill. 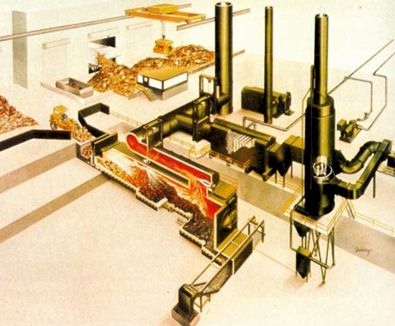 GBB was retained by the City of Pittsfield to monitor operations and full-service contractor performance during the initial year of operation of the 240-TPD modular combustion facility. GBB’s assignment included technical evaluation of system performance, contractor reporting requirements, and assessment of contractor compliance with the terms of the full-service contract with the City. GBB submitted monthly evaluation reports and provided guidance and advice on contract compliance and technical performance.

The Pittsfield Resource Recovery Facility was the first of its type and the inspiration to the development of similar projects. With the Enercon modular mass-burning system, the facility was different from others in that: (1) each unit was designed for five times the capacity as any other modular facility at that time, (2) it utilized excess air in contrast to starved air, and (3) it transported and agitated refuse through hydraulic water-cooled rams.

The Pittsfield Resource Recovery Facility was not only shown to successfully reduce refuse volume by 90%, but to meet federal and state air quality standards as well. By implementing a baghouse design for the steam produced from the heat boilers, SO2 and HCl are removed and flue gases are cleaned before exiting the facility and being emitted into the atmosphere.

Several awards have been granted to the facility including the Safety and Health Achievement Recognition Program from the Massachusetts Department of Labor and Workforce Development, and the Small Combustion Facility Award from the American Society of Mechanical Engineers. Moreover, the renewable energy supply generated by the facility has saved more than 2.5 million gallons of oil per year. The facility is also used as an educational tool and has demonstrated to the community the importance of waste-to-energy as a waste management practice.

After almost 30 years, it still operates 24/7, producing 68,000 pounds of steam per hour. The steam is sold to Crane & Co., Inc., which manufactures the paper on which U.S. currency is printed. The Pittsfield facility experienced community skepticism at first, but has proven that the Enercon technology is reliable and can meet environmental regulations. Moreover, this facility has helped to shape the WTE concept, opening the door to innovative and reliable technologies in the waste management field.

We do appreciate everything that GBB did for us during the Initiative. We’re grateful for your perseverance, expertise, and patience during the project’s tenure. It was invaluable. Thanks again for everything.