Guam Getting Cleaner and Greener as Key Milestones are Achieved

Fairfax, VA (October 18, 2011) – Gershman, Brickner & Bratton, Inc. (GBB) has developed, in addition to its broad array of solid waste management consulting experience, skills and technical resources, a unique expertise and understanding of the recycling and solid waste management challenges of island communities. Over the past five years, GBB has had important assignments in the U.S. Virgin Islands, County of Maui, HI, and the Cayman Islands. In 2008, the U.S. District Court of Guam appointed GBB as Receiver to achieve the Guam Government’s compliance with the Clean Water Act as set forth in a 2004 Consent Decree. The Decree, signed between the Government of Guam and the United States Environmental Protection Agency, ordered the Government of Guam to close the Ordot Dump, cease all leachate discharges into the Lonfit River, and open a new municipal solid waste landfill facility. 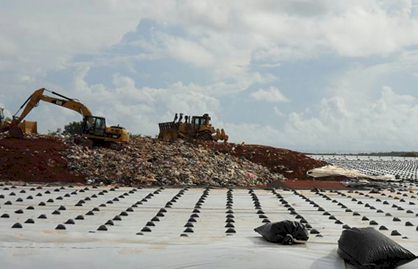 Two key milestones took place this past summer in Guam as the 70-year old Ordot Dump was permanently closed to waste deliveries on August 31, 2011, when the U.S. District Court of Guam officially locked the gate at the Dump and, in a Court hearing, celebrated this milestone of bringing the Guam Solid Waste Management Division into compliance with the Consent Decree. The next day, on September 1, 2011, at an on-site hearing of the District Court of Guam, the gates of the Layon Landfill were officially opened, allowing trucks bringing waste to arrive. The Layon Landfill is a high-tech, environmentally sound and highly controlled landfill for non-hazardous municipal solid waste. It was built with an engineered liner and a leachate collection and removal system that protect human health and the environment. With a capacity in excess of 15.8 million cubic yards, the Layon Landfill will service the island of Guam for more than 40 years.

The dramatic turnaround of the Guam solid waste management infrastructure, with construction costs for the new Layon Landfill and the essential supporting infrastructure, was completed with the final cost coming in approximately $37 million under budget.  Significant operational savings have also been achieved in the area of equipment maintenance, residential trash collection, operation of the Ordot Dump, and convenience centers (known as transfer stations in Guam,) with expenditures for these areas reduced in excess of thirty percent (30%) while dramatically improving results for customers.

On September 2, 2011, U.S. District Court Judge Frances M. Tydingco-Gatewood issued a court order that included a brief background of the case and the following statement: “After approximately three years and five months since its appointment, the Receiver has effectively dealt with many challenges to reach two major milestones under the Consent Decree—the closing of the Ordot Dump and the opening of the Layon Landfill. The court commends the Receiver for its efforts and the tremendous progress it has made thus far.”

An August 30, 2011, Pacific Daily News editorial also stated, “The federal receiver, Gershman, Brickner & Bratton Inc., has the island’s thanks for fixing and improving the government’s solid waste program.” […] “In short, the receiver has transformed the way the island deals with its waste.”

“These two events are important milestones towards establishing a long-term, financially viable and sustainable waste management system for Guam,” said Receiver Representative and GBB Special Principal Associate David L. Manning. “Closing the Ordot Dump and opening the Layon Landfill are the result of the dedication and tireless work of many individuals and organizations, and something from which the people of Guam will reap the benefits for many years to come.”

In the next few years, GBB’s work will include: environmental investigations conducted at the Ordot Dump; overseeing the design and construction of a permanent closure cap as landfill gas and leachate management projects are put in place; managing residential collection services; renovating transfer stations; implementing a Household Hazardous Waste center; and overseeing contractor operations performance.

In a Court Order dated March 17, 2008, U.S. District Court Judge Frances M. Tydingco-Gatewood appointed GBB to be Receiver with full responsibility for bringing the Guam Solid Waste Management Division into compliance with the 2004 Consent Decree for violation of the Clean Water Act. As Receiver, GBB’s objective is to work with Guam’s government, the Guam Solid Waste Authority, solid waste companies, the people of Guam, and the U.S. military to establish a long-term, financially viable and sustainable waste management system for Guam. For more information on the receivership, visit www.guamsolidwastereceiver.org.

GBB is a national solid waste management consulting firm founded in 1980 that works on solid waste collection, processing, recycling, and disposal issues and assists in planning, procuring, and implementing sound, cost-effective facilities and services at the local, state, and national levels for both the public and private sectors. For more information on the firm and its products and services, visit www.gbbinc.com or call 703-573-5800.