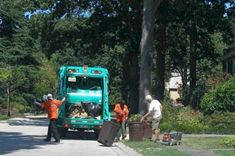 GBB was selected by the Northeast Maryland Disposal Authority (NMWDA) to provide assistance in re-routing the City of Baltimore (City) residential trash collection system. For this effort, GBB teamed with C2logix with whom GBB has a business arrangement for the FleetRoute™ routing software. Based on discussions with NMWDA and the City Department of Public Works, the Trash Collection Routing was conducted as a Service Bureau project by the GBB Project Team, versus the City buying a license and then City staff being trained to conduct the routing, and provided the City with optimized routes to implement. The City, with an estimated population of 630,000 and 200,000 households serviced by Department of Public Works trucks and crews, currently collects refuse twice per week from each residence with approximately 63 trucks operating six days per week. With an initial start point of 214 routes operated by DPW, the initial re-routing scenarios evaluated residential curbside garbage collection operating four or five days per week with twice-per-week waste collection with the set-out locations, including both curb and alley depending upon neighborhood.

The Service Bureau project included refining the geocoding of the City’s customers on the GIS maps and geocoding and identification of customers serviced in alleys. In addition, the street centerline data was expanded to add alleys and travel attributes (such as speeds, one-ways, overpasses / underpasses, etc.) that was not included in the City GIS baseline. City historical service data was used for set-out weights. The GBB Project Team also conducted field observations to update the stop time information.

The alternative conceptual route scenarios were provided to the NMWDA and the City, and included both weekly and twice weekly refuse collection. The weekly collection also included recycling collection, referred to as One Plus One, by the City. Scenarios included both five-day work weeks and four-day work weeks. The analysis indicated that the change in the collection system could save the City about $6 million per year. The City Council approved the change, selected the One Plus One scenario, and the City began the new collection program on July 13th. The new program provides one trash collection and one recycling collection each week for the single family residences in Baltimore. Collections are made Tuesday through Thursday. The GBB Project Team developed the routes, providing route boundary overview maps, customer sequence lists, travel path maps and travel direction reports to the City and NMWDA. These were used in the roll-out of the new One Plus One collection program.

Over the years MSW Management has had the opportunity to feature a number of articles by GBB managers and staff from broad issue discussions to project-specific expositions. All have made positive contributions to the body of solid waste literature and reflect the breadth of GBB's expertise in the MSW field.